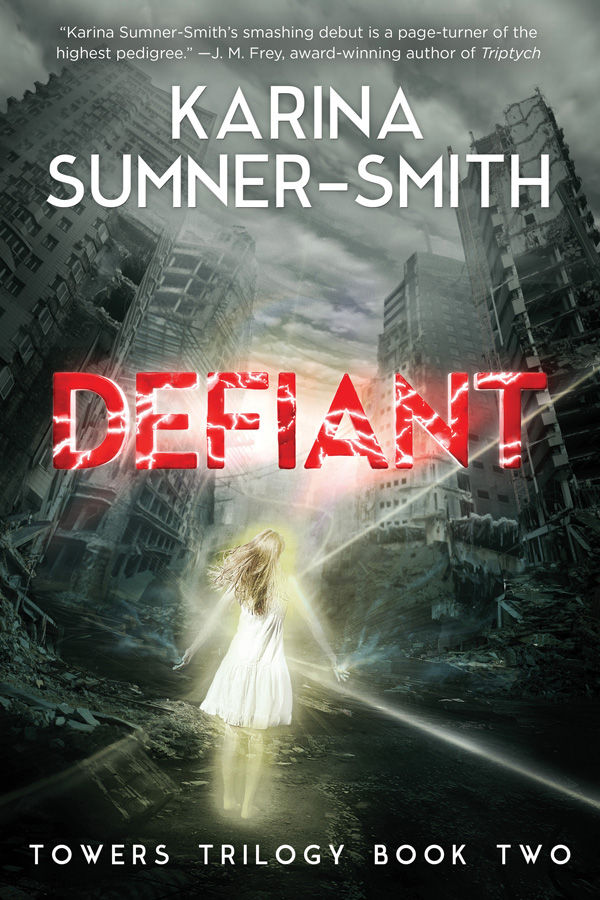 Published by Talos/Skyhorse in trade paperback and ebook on May 12th, 2015. Audiobook from Audible Studios.

Once, Xhea’s wants were simple: enough to eat, safety in the underground, and the hit of bright payment to transform her gray-cast world into color. But in the aftermath of her rescue of the Radiant ghost Shai, the life she knew is gone forever.

Since her fall from the City, Xhea has hidden in skyscraper Edren, attempting to heal. But soon even she must face the troubling truth that she might never walk again. Shai, ever faithful, has stayed by her side – but the ghost’s very presence has sent untold fortunes into Edren’s coffers, and dangerously unbalanced the Lower City’s political balance.

War is brewing. Beyond Edren’s walls, the other skyscrapers have heard tell of the Radiant ghost and the power she holds. But Shai’s magic is not the only prize – nor the only power that could change everything. At last, Xhea begins to learn of her strange dark magic, and why even whispers of its presence are enough to make the Lower City elite tremble in fear.

Together, Xhea and Shai may have the power to stop a war – or become a weapon great enough to bring the City to its knees. That is, if the magic doesn’t destroy them first.

Impossible to put down! Sumner-Smith has outdone herself in this thrilling sequel with higher stakes, darker magic, and a bond of friendship that proves unbreakable–even in the face of war. Readers will be desperate for the conclusion!
- Jessica Leake, author of Arcana
Defiant is a compelling novel of character. Once I picked it up, I couldn’t put it down again, to such a degree that I walked to the train station still reading. Now that’s something I haven’t done for a decade. Tight, tense, and effortlessly readable, its climax is a thing of nail-biting intensity, and it ends with revelations, and more change to come. I can recommend it wholeheartedly—and I’m really looking forward to reading book three.
- Liz Bourke, Tor.com
In this inventive second Towers Trilogy fantasy (following Radiant), Sumner-Smith delves deeper into the dark, destructive magic that is making protagonist Xhea’s life a living hell [...] New readers will struggle to catch up, but returning fans will appreciate that Sumner-Smith has done a fine job of setting up the final good vs. evil, rich vs. poor magical showdown.
- Publishers Weekly
Like its predecessor, Defiant is a brilliant cross-genre piece that blends elements from many sources so that the result is something new and never-before-seen. Looks like Karina Sumner-Smith has scored another hit with her second novel, offering a spellbinding story and characters who are sure to captivate a wide audience.
- Mogsy, The BiblioSanctum
The first two novels are riveting … after the brilliant start with Radiant, Sumner-Smith may have accomplished that rarest of feats, actually surpassing her first novel with the sequel.
- Zhaoyun, Nerds of a Feather
This novel is just as well written as the first one, and … it careens to an explosive conclusion that will leave readers hungry for more. It’s an excellent novel that is hard to put down.
- Holly Scudero, The San Francisco Book Review
It’s one of the best post-apocalyptic urban fantasies I’ve ever found … I can’t wait to read the trilogy’s conclusion.
- Ria, Bibliotropic