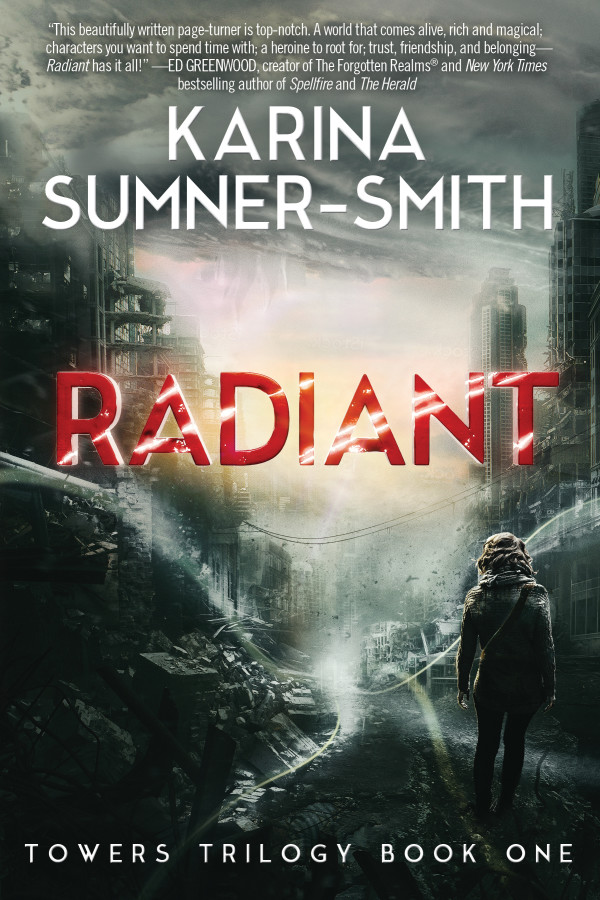 Magic, ghosts, and a dystopian future combine in this genre-bending fantasy debut.

In the City, magic guarantees a life free from illness, hunger and hardship – unless, of course, you have none. Without so much as a spark of bright magic, Xhea can’t buy breakfast, can’t open doors, can’t even tell the City’s systems that she exists. Yet she has a single gift: an ability to see ghosts and control the tethers that bind them to the living world, which she uses to scratch out a bare existence in the ruins below the floating Towers.

Xhea thought she knew everything about ghosts – that is, until she takes possession of Shai, the ghost of a girl who hasn’t died, and finds herself hunted through the Lower City’s dangerous streets. Shai’s body was stolen, her ghost is running scared, and Xhea finds herself trapped between two powerful entities that will stop at nothing to regain the girl, dead or alive. For Shai is a Radiant, a rare person whose ability to generate massive amounts of magical energy make her part mint, part power plant, even as the magic destroys her from the inside out.

But soon even the manhunt for the living ghost is eclipsed by the strange power that Shai’s presence brings to life in Xhea: a magic dark and slow, like rising smoke, like seeping oil. A magic whose very touch brings death.

Published by Talos/Skyhorse in trade paperback and ebook. Audiobook from Audible Studios.

Radiant was written with the generous support of the Canada Council for the Arts and the Toronto Arts Council.

Inequality, economics, and postapocalyptic necromancy combine persuasively in Sumner-Smith’s ingenious, insightful debut. … With a clean, evocative style, a clever transposition of corporate warfare into a feudal future, and a strong, complementary pair of protagonists, Sumner-Smith’s Towers Trilogy is off to a captivating start.
- Publishers Weekly, starred review
If C. J. Cherryh wrote fantasy with a futuristic feel, it would have a lot in common with this book, especially the protagonist. Excellent work, and recommended.
- Michelle Sagara, New York Times bestselling author of The Chronicles of Elantra
In penning her novel Radiant, Karina Sumner-Smith steps into the top ranks of a burgeoning generation of authors who are changing the face of science fiction and fantasy. With characterizations that won’t let you go, deeply textured world-building, and prose that sings, she offers a book that deserves to become a classic.
- Catherine Asaro, Nebula Award winning author of Undercity
A first novel Radiant may be, but by a writer at the top of her craft. Be taken to breathless heights of imagination. Feel your heart pound until it almost breaks, then sigh for joy. This, dear readers, is the story you mustn’t miss and will never forget. Recommended? No. I insist. Read Radiant.
- Julie E. Czerneda, author of A Turn of Light
Finally! A Bladerunner for the fantasy crowd. Magic as you’ve never seen it before.
- Violette Malan, author of the Mirror Lands novels
This beautifully-written page turner is topnotch. A world that comes alive, rich and magical; characters you want to spend time with; a heroine to root for; trust, friendship, and belonging — Radiant has it all!
- Ed Greenwood, creator of The Forgotten Realms® and New York Times bestselling author of Spellfire, The Herald, and many others
I love this. The writing is beautiful, the world, seen from the perspective of the have-nots, both magical and bleak. At heart it’s a book about trust, loss, and the friendships that are built in spite of the bad things. It’s about finding a small place—no matter how strange that place or how strange the characters (and they are)—to belong.
- Michelle Sagara, New York Times bestselling author of The Chronicles of Elantra
An imaginative and original tale of struggle, sacrifice, and friendship within a harsh cultural landscape. Radiant is a vibrant debut, infused with pure magic and strong characters.
- Amanda Sun, author of Rain
In Radiant, Karina Sumner-Smith delivers a vibrant world swamped in magic and desperation, and a truly special heroine in Xhea, who is as raw and powerful as she is vulnerable. This is a must-read.
- Jaleigh Johnson, author of The Mark of the Dragonfly
Sparse, spare, and at the same time a rich tapestry of worldbuilding and the soft misery of her blighted main character Xhea, Karina Sumner-Smith’s smashing debut is a page-turner of the highest pedigree. … Radiant is a book that is both a joy and a pleasure to read.
- J.M. Frey, award-winning author of Triptych
I can’t remember the last time I was as excited about the start of a new fantasy series as I am about Radiant, the first in a promised trilogy.
- San Francisco Book Review.
Long story short, you need to read Radiant. It’s got the right blend between fantasy and sci-fi to appeal to fans of either genre, very realistic characters that you want to read more about, and enough mysteries and curiosity to leave me, at least, salivating over the sequel.
- Bibliotropic
Is Radiant science fiction? Or is it fantasy? Perhaps it is both, just as I like to think this book could fit comfortably in both the Adult and Young Adult categories. No matter how you look at it, it seems there’s something for everyone in this brilliant and unique cross-genre piece from debut novelist Karina Sumner-Smith.
- The BiblioSanctum